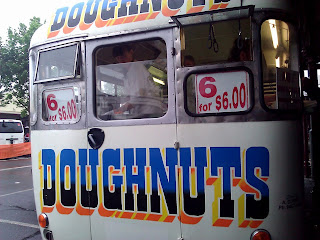 Trams are confusing nowadays with route a's and d's. According to the website, part of it is an attempt to allow mysterious/phantom routes to provide a service, whilst repositioning them on the network. Anyway, after a meal at Kinfolk, we caught tram 55a, which stopped at the markets. So, we snacked whilst waiting. Because I ate a doughnut in the same week at Footscray, I will write both reviews here. Also click for further discussions on the "best" doughnuts in Melbourne.

American Doughnut Kitchen: page on the QV Market website and more interesting history (apparently this is a family store that has operated in the same van since the 1950s). Amazingly the Doughnut Kitchen has its own urbanspoon page, and pretty blog reviews.

Olympic Doughnuts: an age article with a direct comparison of the two doughnuts. Its own urbanspoon page and a photogenic blog review.

American Doughnut Kitchen: $6 for 6, although apparently the people serving you can sometimes be charmed into giving you more. Sadly, it didn't happen this time.

Olympic Doughnuts: from memory, similar price of about $1 each (will stop to check exact prices next time I'm there). 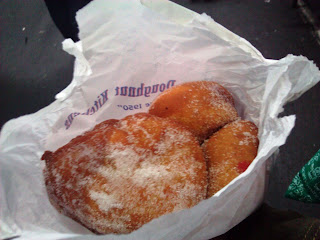 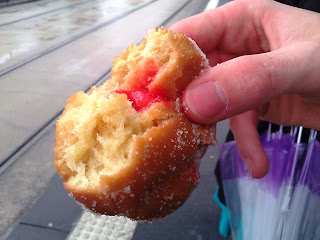 American Doughnuts (image above) - I remember buying the 6 donuts in the past and only being able to finish one. Personally, I find jam donuts too oily, and the jam too sweet. But I invited the solipsist, a long-time fan of this store - "sweet outside, doughy inside and the delicious smell, the feeling of biting into them and getting warm sweet jam alongside the dough... wonderful." However, on this occasion he was disappointed with the batch of donuts that were hard outside and with a tough, rather than fluffy, dough.

Olympic Doughnuts - didn't have a photo to compare, but the doughnut I was served the other day was brown, even more oily than usual, and the dough tasted terrible. According to the Age (which conveniently has a good photo of the Olympic Doughnut) - the difference is cosmetic, but I would say the American Doughnut was much more palatable. I had a bite at Footscray that day, threw the rest in the bin and felt unwell for awhile. This is surprising as many people seem to have had good experiences with the doughnuts there. Maybe the moral of the story is that quality of doughnuts vary from batch to batch.

Other: not to be confused with the van serving jam doughnuts, at Victoria Markets there is a van called the "Spanish Donut Van", which serves churros.

Rating: 3/5 for the one at American Doughnut Kitchen and 1/5 for the one I had at Olympic Doughnuts (maybe churros are more my type of oily, sweet snacks).

Posted by bitingtravels at 1:15 PM