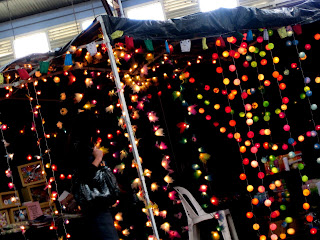 Night markets are perfect place to buy and sell candle and light decorations. As the sky darkens, the rainbow coloured fairy lights glow... (read more)
Posted by bitingtravels at 3:20 PM No comments: 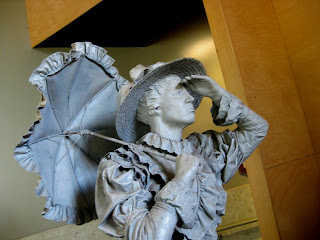 "We're going to go for a picnic at Hanging Rock," they said, smiling knowingly. What is the significance of that? you say... (read more)
Posted by bitingtravels at 2:43 PM No comments: 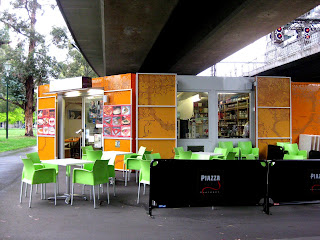 The last time I had crepe was at the Southern Cross Station food court - rich caramel, apple, and lots of out-of-a-bottle whipped cream (I like Asian crepes, but this was sickening). But throughout the past ten years or so, I've mainly had crepes from Ken's Crepes - a very popular store at the Mindil Markets in Darwin, owned by our previous neighbours.

Roule Galette has two branches, the original is located near Swanston and Flinders Lane intersection. Less known is the second branch across the Melbourne Aquarium, where there is a row of bright orange stores underneath the overhead train tracks. Originally, we intended to visit Roule Galette last week, armed with the Groupon voucher bought from almost half a year ago. However, the venue was closed for Cup day, and we dined at a nearby cafe instead.

Location: see map for both branches

Roule Galette (new): 26 Rebecca Walk, Melbourne (this section is a fairly new development and may not show up on some maps)

Website: official website with good pictures of the crepes and crepe making, a detailed review from The Age, a blog with pictures of Flinders branch and more yummy crepe pictures on another blogger's write up.

Price: mostly $5 to $15, full menu online (menu is the same for both sites), and pictures below for those of us who love visuals. 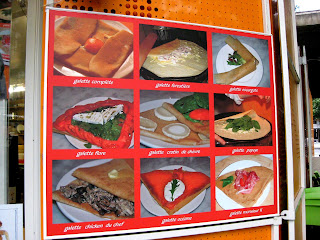 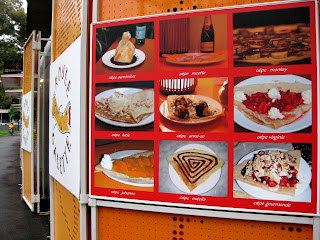 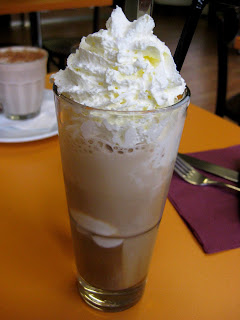 Iced coffee - maybe I should have mixed it more, but initially the coffee taste was quite strong, then as the ice cream melted through, it became too sweet. Plus I felt there was too much cream for the amount of iced coffee served. 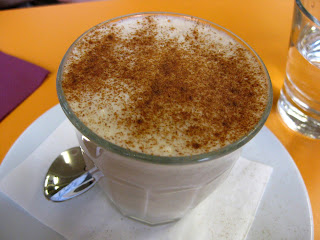 Chai latte - another case of milky chai with minimal spices. Disappointing. Also the top was sprinkled with a strange peppery/chilli powder, I wonder what it was. 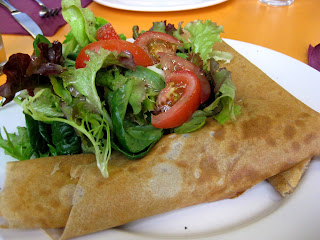 Escargot - "filled with 8 snails in a white sauce with garlic and parsley". This was one of the galette options. According to their website, galette is savoury and made from buckwheat flour (gluten free), whilst crepe generally has sweet fillings, and is made from wheat flour. I haven't had savoury crepes/galettes for years, and really enjoyed the buckwheat flavour, and texture, which was stiffer and rougher than sweet crepes. The sauce was thick, almost lumpy, and had no particular flavour, other than a garlic tinge. And how about the snails? 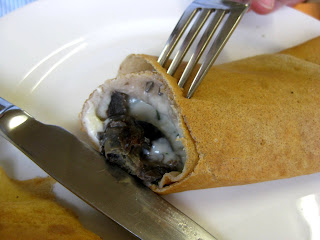 Who isn't fascinated with snails? Let's take a closer look. 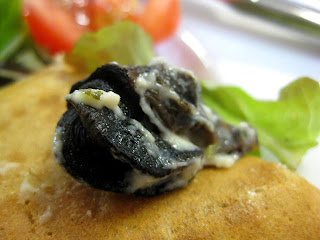 Escargot is the French word for snail, and in common use it refers to the edible snails in French cuisine. The snails were okay, my friend commented that it was like eating mussel. I found it rather tasteless, compared to Chinese-style snails. Apparently the small river snails are a Shanghai specialty. Now that I think of it, I've eaten snails many times, scooping the tasty meat with a toothpick, and not once realising that it was considered an "exotic" food. 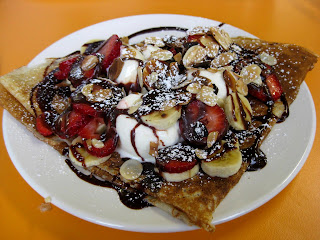 Gourmande - a sweet option with "ice cream, fresh banana, chocolate, strawberry, flaked almonds." This was the most elaborate, and most expensive items on the menu. I enjoyed the crepe itself, the rich chocolate sauce, the lovely fresh fruits, and the almond crunch (unfortunately, the almonds were slightly burnt). The mix of flavours were nice, but slightly chaotic - my friend commented that the dish was "not particularly French, a simpler crepe with ice-cream on side might have been better."

Other: both branches of Roule Galette offer indoor and outdoor seating on bright orange tables. However, the Flinders branch is cosier (ie limited seats) whilst the Rebecca Walk branch is spacious and modern. Today, we dined at Rebecca Walk and there were plenty of seating even during lunch hours. The French music played in the background, indoor decorations were simple but comfortable, waitress was nice, and there was a constant lovely aroma of cooking crepes. Ah, a pleasant and relaxing environment for a long chat. On a side note, I can't help notice the child-like Comic Sans font - it's one of the only stores I've seen who uses it. 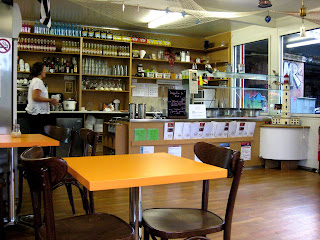 Rating: 4.5/5 I liked the texture of the crepes themselves, and there was an exciting variety of fillings. There were "crepes flambees", which would be interesting to order next time. The crepes were reasonably filling, but I'm not sure the sweet crepe we had was really worth $15. Drinks could be better. Finishing up on a good note, although we've made yummy crepes ourselves for breakfast in Ballarat, a trip to the crepe cafe was fun and I would happily visit again (yes, even without the vouchers)!

Posted by bitingtravels at 8:47 PM 2 comments:

In recent months I've had numerous promptings to try banh mi (did you know this word has been added to the Oxford English Dictionary). It's like a bread roll, but it's soooo good, my Vietnamese friend said. Okay, how good can a roll get, I thought. But I kept the advice in mind and stopped in Footscray yesterday to try it for the first time.

Website: urbanspoon reviews, "banh mi showdown" on a blogger's website, one of the five recommended banh mi stores on the Age (To's Bakery proudly displays the Age article on their window) 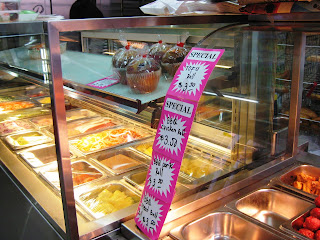 BBQ chicken banh mi - not sure if the bakery usually makes it fresh (we went quite late in the evening) but our rolls were premade. Regardless, bread was good, lovely golden crust with fluffy insides, and unlike some baguettes I've had, this did not require too much work to chew. 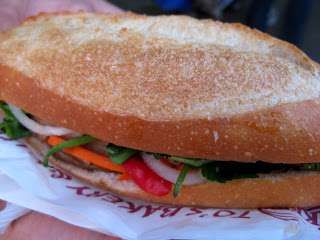 Let's have a look on the inside (see below)! The meat was chicken chunks, with flavours quite similar to a lemon grass chicken chop at any Vietnamese restaurant. Sweetish, picked carrots and daikon, coriander, and chunks of chilli. Loved it, generous servings of the filling, and all the flavours worked together really well. But I will probably be more careful with the red chilli next time - had a bite of one accidently and I was in agony. 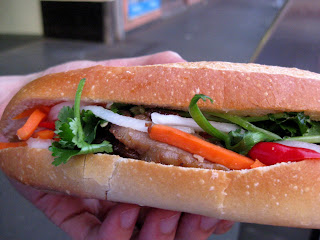 Other: for awhile I couldn't figure out the name of the bakery, because it has no signage outside. Why should it, my friend said, everyone knows where it is. Other foods on offer include desserts, snacks, and some strange looking hot foods. One looked like a giant mushroom but was apparently a sweet flour based dessert. I may have offended the lady by asking about it and saying, hmm maybe next time.

Posted by bitingtravels at 5:06 PM 3 comments: