A not very posh pre-theatre / pre-musical dinner, and an always much loved (yet increasingly rare) occassion of dining with my best friends from school.

What's with the name? Well, Wikipedia has an informative article about "mamak stalls". Didn't realise that there was a particular name for this type of establishment, serving a standard menu of different sorts of roti, mee goreng, teh tarik and its variations - I guess the Cheese Prata Shop I wrote about was a mamak stall too! 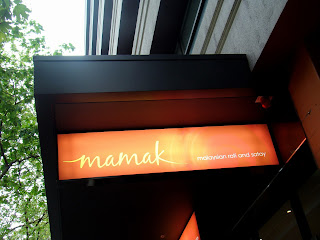 Website: I'm impressed that they have an official website which is rather informative. For a restaurant which seems to have been open for barely a month, it certainly has a lot of "blogger" and "critic" reviews on Urbanspoon! 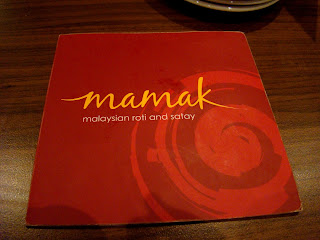 Price: $3.50 drinks, meals for $10-$15 per person. Full menu available on their website - plus points for saving me the bother of taking shaky menu photos! 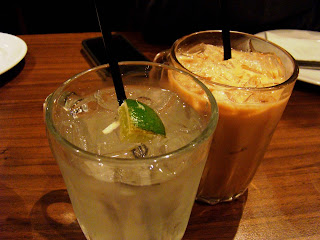 Limau ais (fresh lime with syrup on ice) - on the left, in the photo above. Felt that this tasted like, and was as sweet as, flat Sprite. Not sure the drinks at Mamak are worth $3.50 for these small glasses - I prefer to save the change for a Chatime bubble tea down the street.

Teh ais (ice milk tea) - on the right. Strong tea flavour, pleasantly sweet, but unremarkable. Is teh ais how this is usually written in Malaysia? In Singapore, I had always seen it as "teh ice" or "teh ping" on menus. You don't want to see how much condensed milk goes into making this drink. It's a fantastic drink on a hot summer day, which probably means it's less nice on a cold and rainy Melbourne day. 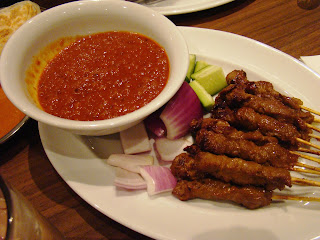 Satay chicken - $16 for a dozen. Singaporean/Malaysian styled satay is something I never got into. Partly because the minuscule pieces of meat just isn't filling, and partly because we had it so often with catered lunches at the hospital. The meat here was tender but lacked a smoky, grilled flavour. Sauce was sweet, mildly hot, and quite nutty, with lots of crunchy peanut bits to chew on. My friend really enjoyed the sauce and used it as a condiment to everything else too. At least Mamak could be more generous with the vegetables. And doesn't satay usually come with compressed rice cubes (nasi himpit)? Overall it was just not worth it, and we wouldn't order it again. 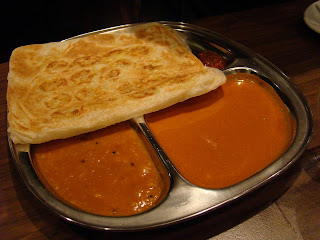 Roti pisang (banana roti) - $7.50. It was interesting how you could choose for the sweet roti to be served "traditionally with curry or enjoyed as a dessert with ice-cream". The sweet banana flavour was lovely, and the roti itself was reasonable, but not crispy enough. The left hand side was a dhal curry, and right hand side was a rather hot curry sauce which tasted creamy, perhaps with blended cashew nuts (but other reviewers said it was fish curry, maybe I should have asked exactly what it was). 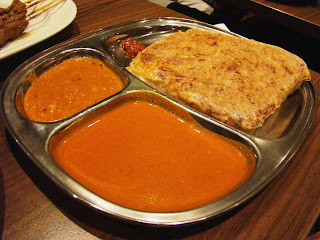 Murtabak - "filled with spicy meat, cabbage, eggs and onions" ($11.50). Basically it was the same dish except with stuffed mince meat instead of bananas. The filling was tasty enough, but again the roti lacked any crisp. Even with a solid layer of stuffing, the outer parts shouldn't be soggy, but it was! 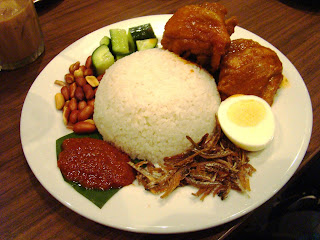 Nasi lemak - $11.50. There are several options for the main meat you want to add to the dish, I chose curry chicken. Nasi lemak is a common dish in Malaysian/Singaporean cuisine. Memorably, I first had it at Nasi Lemak House in Melbourne, and hated it. Gave it another shot at Changi Village in Singapore, and still wondered what the fuss was about this dish which basically consisted of rice, a lump of chilli and a single small fried chicken wing. The most basic version I had was one from a roadside stall in Malaysia, where all the brown paper wrapping contained, was a ball of rice with sambal chilli - interestingly, by then I had come to enjoy this simple but tasty dish.

Literally, the name translates to "fat rice", referring to the coconut milk which the rice is cooked in. Locals tell me that a good fragrance for the rice is the key element of the dish, which is a bizarre concept because rice usually accompanies a dish.

As for the dish at Mamak - the rice had a coconut fragrance, but it was mild and easily overpowered. The grains were unevenly cooked, and the rice was served warm but not hot, which I dislike immensely. The chicken was soft and nicely cooked but there was actually very little meat and much bones and cartilage. The sambal chilli had a decent flavour, but wasn't hot at all, and there was barely enough to go with the rice. I liked the peanuts and anchovies (ikan bilis) though; they were crispy and not coated in salt. 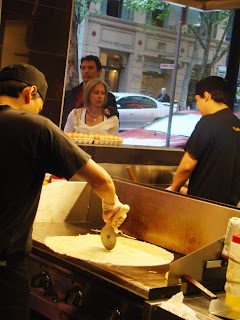 I liked the open kitchen concept, it's interesting to watch the chefs spin the roti and cook it into flat squares or cones. Seating was comfortable, and service was fairly attentive. We were there for an early dinner but apparently it does get quite crowded, with long queues.﻿ 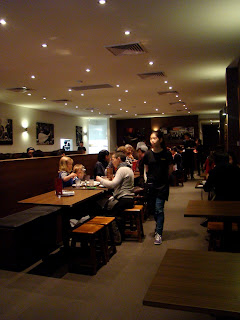 Rating: 2/5 we wondered why Mamak, being "talk of the town", had a low rating of 58% on Urbanspoon. Now I feel that the rating is well deserved.

Having a small targeted menu is good, but for a place which is supposed to focus on good roti, the roti is soft, flat and generally unimpressive. The roti canai, which we didn't order this time, looked yummy though. Also, the food was overpriced. It's acceptable to pay an inflated price of say $10 for a nasi lemak in Melbourne, but for that price, you can't provide a serving size as small as the ones in Malaysia/Singapore! For Malaysian food in Melbourne CBD, I prefer Papparich at QV (but haven't had the exact same dishes there so can't compare directly). Or we could avoid these places altogether, and wait for the trip to Asia!

Posted by bitingtravels at 3:20 AM