I seem to be coupling similar restaurants of the same cuisine, comparing and contrasting their dishes. Unintentionally though. For the last few posts I've been posting in the order in which I've dined (and I'm not always the one who picks where we go)! 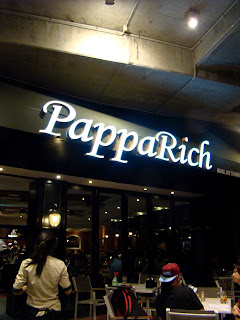 Don't you find the name odd for a food establishment - the combination of a father (pappa) and a guy with golden blings, rolling in cash (rich)? Or is it supposed to imply that the restaurant itself is rich and classy? Or maybe founder Rich Tan had all these things in mind, plus of course including his name in the trademark, when he started the business.

Prices: ~$10 for most of the noodle or rice dishes. Similar to Mamak, this Malaysian restaurant also has the full menu... but without prices! 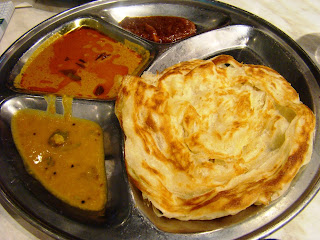 Roti canai - $5.60 "a fluffy and slightly crispy hand tossed bread". I remember a Malaysian person telling me that the roti canai was his favourite supper/snack at PappaRich - so half a year later when the long lines started becoming shorter, I came back to try it. The first occassion I had this, the roti was fluffy, crispy and hot. But second time round (photo above) it was flatter, just warm, but still with a nice crisp. I personally like the dippings here better than Mamak - the curry sauce was nicer (middle) and the spicy kick from the chilli was enjoyable, plus there was more of it (right). However, the roti canai itself at Mamak does look fluffier and fancier. I wouldn't recommend getting this with chicken as a main for about $10, unless you are after a snack and not a proper meal.

The names are somewhat confusing, but roughly speaking roti canai (Malaysia), roti prata (Singapore) and paratha (India) are variations across the region, of flat bread served with or without stuffing and curry sauce. The Indian type seems to be denser in flour content with less layers and crisp, the Malaysian type more rounded, flakier and fluffier, and the flatter square shaped type seems common in Singapore. But I'm no expert on flat breads, or these South East Asian cuisines. There seems to be some hot debates on the internet regarding 1) whether "roti canai" versus "roti prata" is purely a regional name difference, or whether the name conveys something about the way it's made, and 2) which type is better, with some subtle or not-so-subtle Malaysian versus Singaporean sentiments. 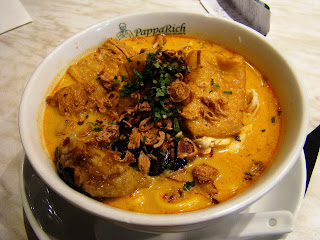 Curry laksa (chicken) - had this a couple of times and I quite like it. The soup base is quite rich in coconut cream but tasty nevertheless. Curry soup, thick yellow noodles, fried eggplants, tofu, tender pieces of chicken and sprinkled fried shallots - what are a lovely combination of flavours and textures! My favourite laksa place so far in Melbourne would still be Chef Lagenda, I remember the laksa there to be quite amazing but I will have to revisit to remember what exactly made it special.

Speaking of laksa - laksa is surprisingly popular in Darwin, and sold at a variety of stores from cafes and restaurants, to food courts and almost at all the markets (from Mindil, to Rapid Creek, to Parap, to Palmerston)! 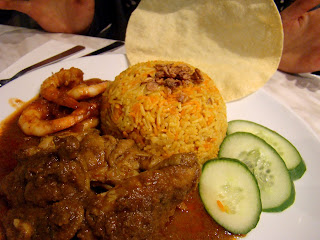 Biryani rice with curry chicken and sambal prawns - would have been a nice filling meal. But for all components of the dish, neither the flavours or textures were particularly impressive. For an average meal like this I would actually prefer to buy the $6.50 rice and 3 dishes from Minang Nasi Padang or Norsiah's Kitchen near Melbourne University. (Beware of the lingering smell on your clothes after entering Norsiah's though!) 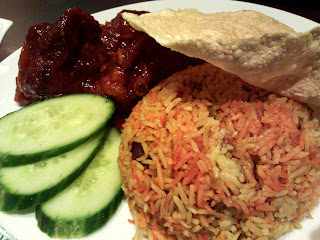 Biryani rice with red chicken and sambal eggplant - same deal as the dish above. Red chicken was soft, with plenty of meat, and with a pleasant sweetish, tomato-tasting sauce. Slippery soft texture of the fried eggplant (hard to get it wrong!) was nice. 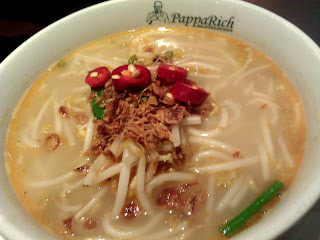 Ipoh kuay teow soup with steamed chicken - the pictures above and below are from this same dish. Basically this is your chicken rice dish, with noodles. Chicken was disappointing, and not as tender as it looked. Not sure I like plain soup noodles that much, but it did taste like a healthy option if that's what you're going for! 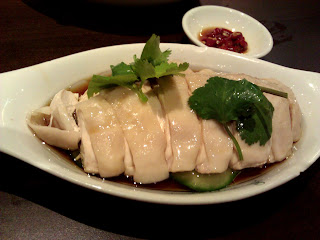 I insist that overall, Melbourne is better than any other city I've been to for food. Looking at this though, I have a sense of nostalgia towards the countless less than $3 perfect slippery chicken pieces which washed down so well with chicken rice and chilli, or porridge, at the NUH staff canteen. My colleague had the same chicken rice there for a month when he first lived in Singapore, then boycotted the dish altogether from his diet haha. 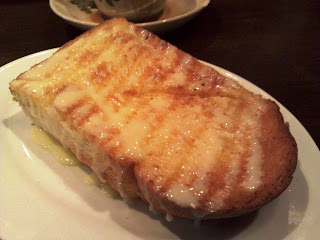 Hainan toasted bread with condensed milk - really liked this. A thick slice of fluffy soft bread, golden and crunchy on the outside, dipped in condensed milk. Wouldn't mind coming back for their breakfast-style meals on another occassion.
Other: I quite like the menu at PappaRich with description of featured dishes, and the large colourful pictures. Seating both indoors and outdoors are comfortable. The ordering system takes a bit of getting used to, because you write orders yourself, press a buzzer, and hand the piece of paper to the attending waiter or waitress. Oh, they seem inflexible with varying orders, but then, orders come out with surprising efficiency too. 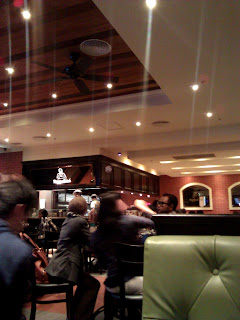 Rating: 3.5/5 some average dishes, but there's enough yummy items on the menu to keep me happy and returning. I return more often than I think the food is worth, simply out of convenience - what a great, central location for a meal or snack at any time of the day! Peak hours are noisy, with chairs too close together, but overall it's a comfortable casual dining environment. Would be interested to know more too, about what the PappaRich franchise stores in Malaysia are like.

Posted by bitingtravels at 1:50 AM